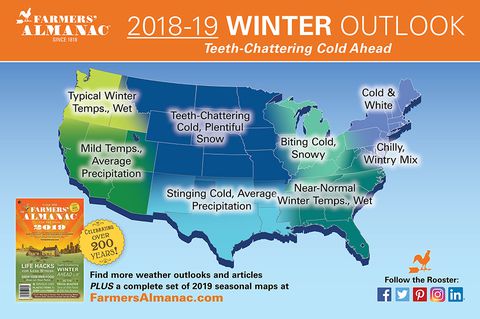 Although the Old Farmer’s Almanac recently released predictions about a mild, average winter…the other Farmers’ Almanac has released a very different forecast.

“Contrary to some stories floating around on the internet, our time-tested, long-range formula is pointing towards a very long, cold, and snow-filled winter,” Farmers’ Almanac Editor and Philom Peter Geiger says in the press release. “We stand by our forecast and formula, which accurately predicted most of the winter storms last year as well as this summer’s steamy, hot conditions.”

Founded in 1818, the Farmer’s Almanac is known for long-term weather forecasts generated by a mathematical and astronomical formula first used in 1818 by founder David Young. This long-standing formula uses sunspot activity, planet positioning, tidal action and a variety of other factors to work. The exact formula is carefully protected by the Farmers’ Almanac organization – known only by their weather prognosticator who goes by the pseudonym of “Caleb Weatherbee”.

The Almanac, which provides 16 months of weather forecasts for 7 zones, is predicting winter 2019 to be “colder-than-normal…from the Continental Divide east through the Appalachians.” The report also warns of above-normal snow accumulation for the Great Lakes states, Midwest, and central and northern New England, with the majority of it falling in January and February.

Whether you follow long range weather forecasts or not, we’re here to help. To speak to a Woodpellets.com expert, call 1-800-PELLETS!