Wood Bricks Burning in a Wood Stove and Fire Pit

This video tutorial of how to burn wood bricks with fire wood in a wood stove is a series of clips filmed over 75 minutes. A smoldering piece of mostly burned-through firewood is in the back, with three Cleanfire Wood Bricks stacked in front. There is no kindling or extra assistance needed, due to the already hot firewood ash bed.

It’s important to remember that whether used alone or with firewood – wood stoves should not be packed tight with wood bricks. Don’t be fooled by their size. Wood bricks pack a super hot punch – which can damage a stove if used incorrectly. We recommend testing brick and/or brick+firewood burning variations to find the best fit for your stove.

Cleanfire Wood Bricks are designed to release as much heat as possible when they burn. When anything burns, the energy is released as both heat and light. Bricks release much more energy as heat than of light, which maximizes the heat output generated.

If you are used to seeing the larger flames firewood typically generates – it can be surprising to feel how much heat comes off burning bricks with a smaller flame.  Cleanfire Wood Bricks burn at up to 8000 BTUs/lb – much more efficient than air dried cord wood which typically burns at 6500 BTU/lb.

Take a look at the flame/light comparison below. 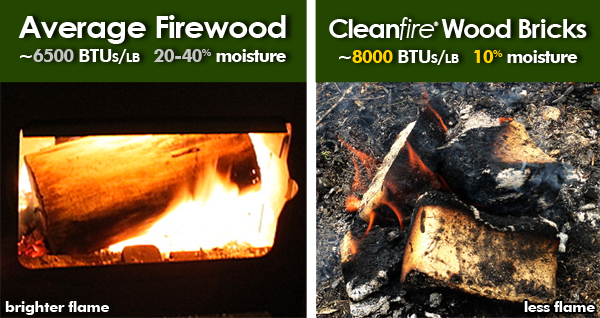 Although they’re manufactured to be a handy firewood alternative for wood stoves – they’re great for burning in a fire pit too! Most states do not allow firewood to be moved and brought into campsites from outside sources, because firewood can transport insects that can hurt trees and spread disease. Since wood bricks have no bark or bugs, and are bundled in shrink-wrapped packages – they’re completely safe to bring into campsites.

You can throw wood bricks into your bonfire, or you can burn them alone! You simply stack bricks as shown in the video above with plenty of airflow between them. Including small pieces of kindling and newspaper within the spaces. Light your kindling evenly and the bricks will begin to catch fire. Add more bricks as needed, or add firewood to supplement.

The flames might not be as high as a typical bonfire, but the heat output will be significantly greater. The hot ash bed created by wood bricks is perfect for s’more cooking!

Are you ready to order your wood bricks? Call 1-800-PELLETS to speak to an expert, or shop online at www.Woodpellets.com 24/7!