A Look at the 2015 Wood Pellet Export Market 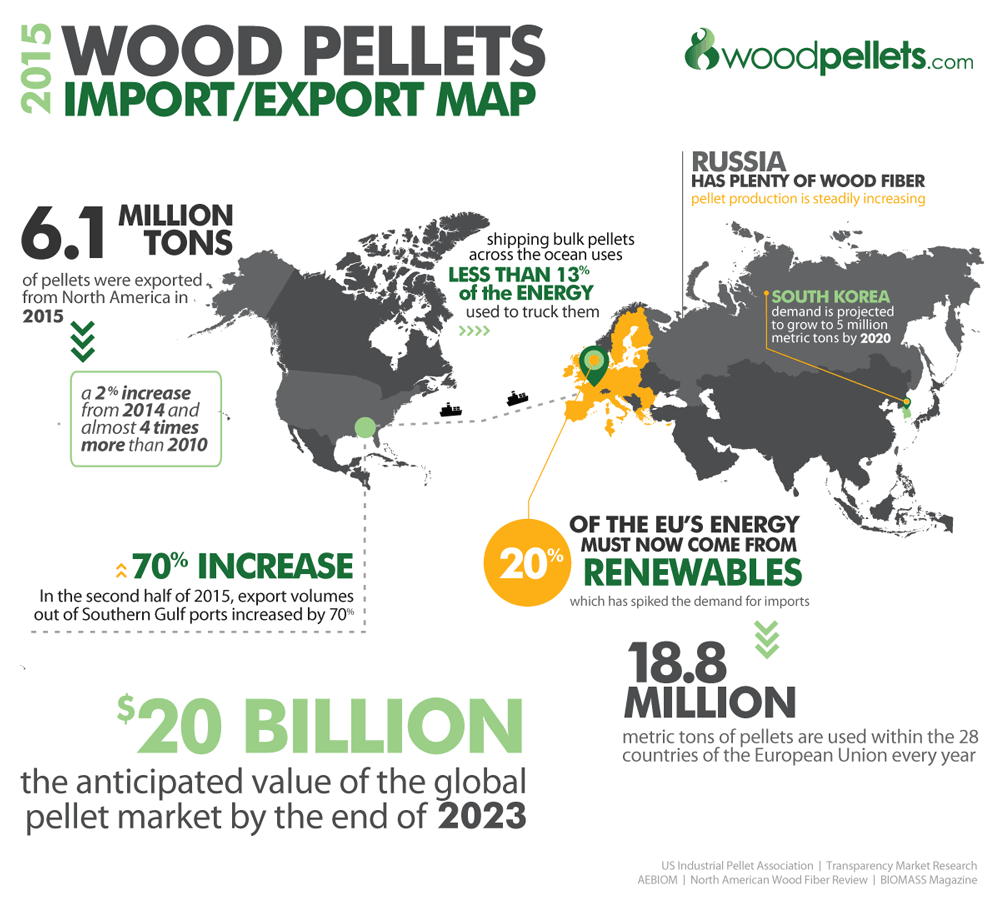 Not long ago, about 80 percent of pellets made in the United States were used domestically, largely for residential heating. Today, wood pellet heating has grown into an international energy and environmental super-power, driven by the European Union’s goal for 20% of all generated power to be sourced from renewables.

Since the US has many well-established pellet mills and significantly greater forest resources than Europe – millions of tons of bulk pellets are shipped overseas from the States to Europe. You’d think that this long distance hauling would reverse any environmental benefits of wood pellet energy, but transporting freight by ocean actually uses less than 13% of the energy of transporting the same freight by truck. Enviva Biomass, a main supplier for the UK-based company Drax, explains:

Ocean freight is substantially more carbon and energy-efficient on a per ton basis than trucking, which means that shipping long distances makes more sense than trucking over moderate distances. Shipping a ton of pellets from the Southeast U.S. to England results in less carbon emissions than trucking that same ton from northern Scotland to England.

Researchers detail in a report (Carbon Savings with Transatlantic Trade in Pellets: Accounting for Market-Driven Effects) that the greenhouse gas intensity of wood pellet-based electricity is between 74 to 85 percent lower than that of coal-based electricity savings. Furthermore, even after considering all the logistics, harvesting wood pellets in the US and exporting them to the EU is still far less environmentally harmful than burning coal within the EU for electricity.

The top European markets for US exporters were the UK, Belgium, and the Netherlands. Future opportunities are within countries like Germany and France, which will need to increase imports and rely less on domestic production in order to meet a steadily climbing demand. Within the 28 countries of the European Union, 18.8 million metric tons of wood pellets are burned annually – and the United Kingdom accounts for over one-fourth of the total global consumption.

Take a look at our infographic map to learn more about this fascinating industry, and let us know what you think!