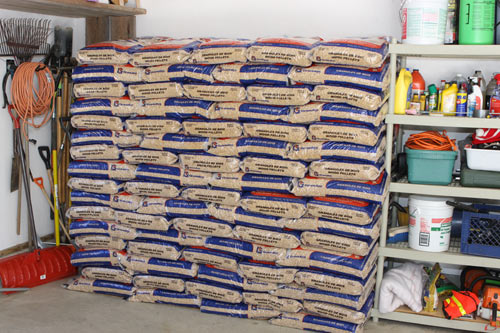 Having recently purchased a new pellet stove, I quickly found myself facing an issue that just about all pellet stove owners face – where the heck do you store all those bags of pellets?

Some store them outdoors – which if fine if you provide them a little extra protection. The plastic outer shrouding can definitely withstand a season outdoors. But who wants to trek through snow and ice to get a bag of pellets? I would rather be able to grab them in my socks.

Basements are also popular storage areas. But mine is so full of junk… I mean special keepsakes that my wife could never part with…that I literally have no room for three tons of pellets.
So I decided to make my garage work.

But like most garages, mine was already fully packed with stuff – bikes, mowers, tools, toys – and two large cars to boot. So my first step was a little exercise in organization followed by a couple trips to the dump. I know some folks simply have the skids delivered right into the garage using a pallet jack (which woodpellets.com offers in many areas). But the dimensions of the skids would have meant that they would have stuck out into the garage more than I liked.

My chosen spot was the back wall – which left me about six feet of space to work with. And with 3 tons of premium softwood LG Granules sitting in my driveway, I needed to plan this a little cautiously in order to get them to all to fit into this tight space.

I started by laying out the bags in this formation (against the back wall). I did put down a sheet of cardboard in case water was spilled nearby. But I didn’t want to use anything taller for fear that my pile would be too high to reach. 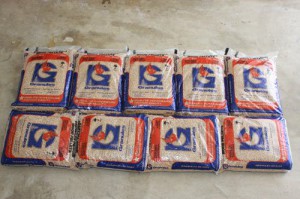 The five bags in the top of the picture fit my width requirements perfectly – six feet. But the bottom 4 bags needed a little bit of finessing to get them laid out right. What I did was push them a little closer together to get them to fit into the same width.

Next, I did the same exact thing on the second layer – but in reverse. The five bags where in front, and the four in the back.
I also made sure that my base was very flat and stable. I physically smoothed out each bag to give it a more flat surface on which to stack the next layer.

In addition, I molded the bags a bit to give the bags in the front a little more bulk. Because I have young children, the last thing I wanted was for this heavy pile to fall into the garage. By building the front row a little higher (bulkier), I was able to get the stack to lean a bit towards the wall – and eliminate any concerns for safety.  In less than an hour, all the pellet bags were stacked.

It took 17 layers with 9 bags in each layer (except for the top layer which only had 6 ) for a total of 150 bags (three whole tons). They were stacked in approximately the same space occupied by two home depot shelves. In addition to having them neatly stacked and out of the way, I still have some storage space on top of the pile!

Have you secured your fuel yet? Give us a call at 1-800-PELLETS, or order your wood pellets online.